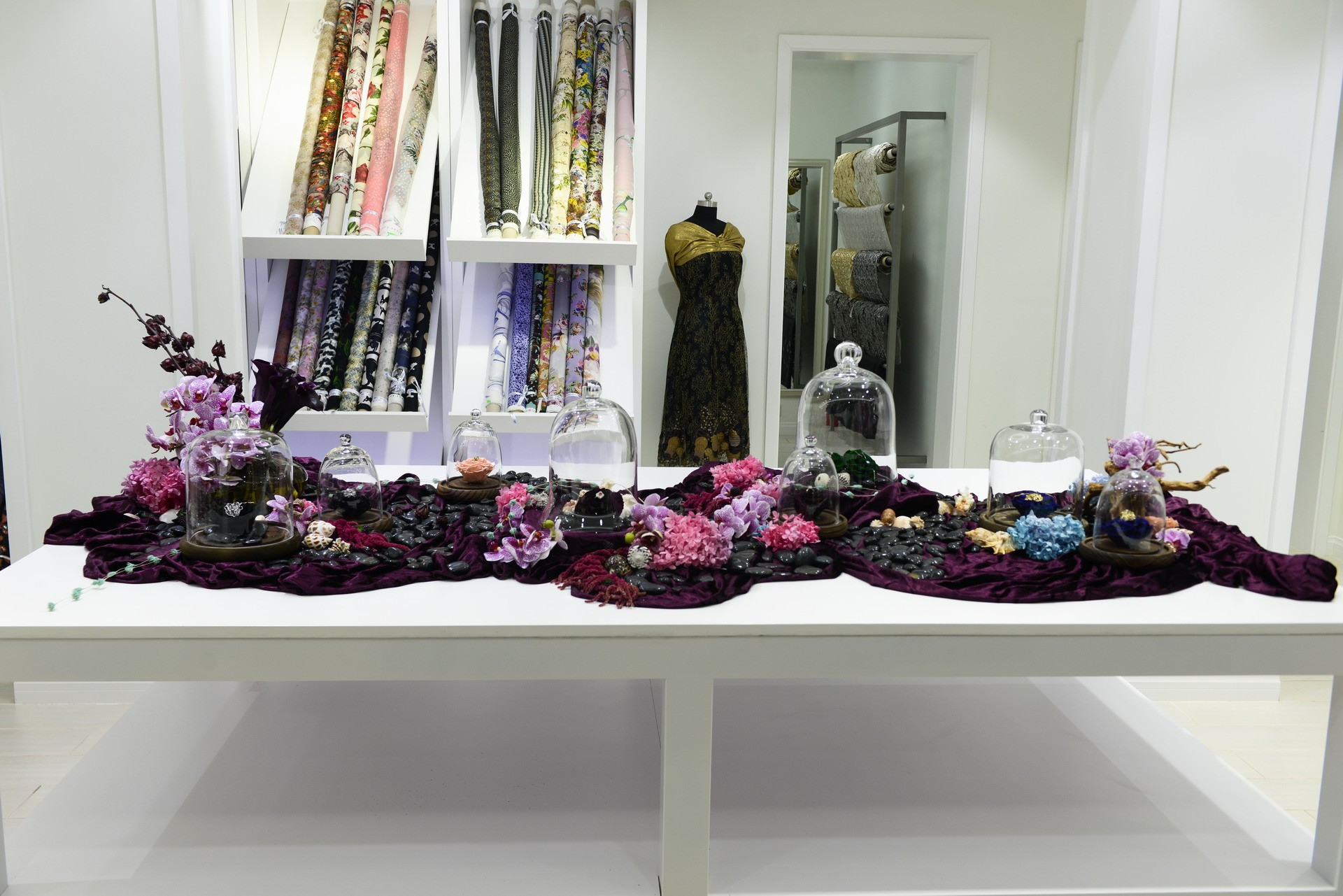 Cephalopod Bling; In the Lap of Luxury with IFF

Cephalopod Bling; In the Lap of Luxury with IFF

What do shimmering haute-couture fabrics and cuttlefish bones have in common? You might have been at a loss to guess “a luxury lifestyle event,” though certainly still correct if you’d guessed “engagement rings!” Still a little hazy? Must be all the sparkling wine…
October 15th to October 18th saw IFashionFactor (IFF) offering a feast of events in conjuction with partners Tissura and L’Amour Toujours. To background a little, Tissura is Russian high house of fine fabrics; L’Amours Toujours a kinky, high fashion lingerie brand whose products one should be thrilled to see on their bedroom floors. Fingers crossed. Ahem.
The first evening brought IFashionFactor Founder Iraida Florea and partners Tissura CEO Dmitry Shklyar and L’Amour Toujours Founder Sofie Chen together in the Tissura showrrom to play hosts to a mixed crowd of models, media, curious passers-by, friends and the lucky set of fashionistas that managed to get wind of the event.
Speaking to Iraida, I had the sense of being welcomed into an entire world. The depth and sophistication with which she invents her luxury fantasies attest to a soul truly dedicated to her craft. There is no doubt in my mind she loves what she does, and it seemed as if all immersed in it that night got a hint of it.
Beautifully executed visions aside, it should be said that the professionalism on display should win IFashionFactor plaudits, the international team Iraidi assembled demonstrated an abundance of competence.  The overall qualities I was left with after our first meet was an impression of mindful efficiency, joie-de-vivre and visionary genius. There’s a point in our conversation in which Iraida literally took me by the shoulders and looked me deep in the eyes to tell me in total earnestness “I only want to work with creatives who live for the love of their art.” Looking around at the joy in the room, I thought I really couldn’t fault her her discrimination, the plan seemed to be working.
After soaking up libations and a number of decadent horderves, the public took in a demonstration by IFashionFactor jewelry designer Michele Casadei–his debut in China. With a shy smile, Michele treated them to a demonstration of one of the techniques his father taught him in the handcrafting of fine jewels. With a small carving knife in hand, he set down to hand-engrave the artful curves and patterns that would become a jewelry mould in his media of choice which, to my utter fascination, was a cuttlefish bone. Funny coincidence that such a colorful animal could be used in the making of extravagant jewels. In any case, it was clear by the quality of the pieces on display that Michele is a special talent.
The demo had barely finished when, In a moment of spontaneous genius, a couple of off-duty models volunteered to be draped in luxury fabrics and fine jewels. A ring of would-be photographers quickly formed to snap up the abundance of beauty while laughter and clapping could be heard applauding the sudden wonderful turn of events.
Among the throng of snap happy photographer’s was IFF’s own Pierre Vauvillier, who was there introducing his latest works whilst simultaneously commanding models and randoms alike to pose for him. It’s funny the eagerness with which people complied with his commands. How did he he do that? Seems like something I should figure out…
The evening continued mostly in the form of a lively social and visual feast as guests tittered among vividly detailed luxury fabrics and a display of numerous exquisite jewelry pieces from Michele’s Klepto collection.
Talking to Michele, I found he’d learned the hand-carving technique from his father when he was just 10 years old. And really–it shows–you can almost see the love and tradition in the pieces on display. Maybe it’s the wine that made me wax romantic, but the idea that it’s heart and heritage that makes Michele a special talent really appeals to me. Wrapped in a glow of wine warmth and luxurious overstimulation, I exited the Tissura showroom into the cool October evening and wondered… if tomorrow’s event is going to be in a lingerie showroom, then how good will that one be?
Reporting by: Ellel